A huge undertaking, but so far worth it.

We have lived in our house for three years now, and have done quite the amount of work to it. Hard wood floors, painting of the bathrooms, gutted a room for Carter, but I have not touched the kitchen until now.

I painted my tiles a couple months ago just, to get rid of a peach color that I couldn't stand anymore. And that was it. Now, I did a lot of research and decided I wanted to make my island and counters match. 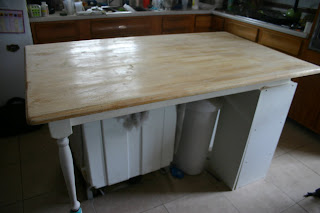 The island was a wood top, and the counters were white with copper flakes in it. Yuck. I have lived with it long enough. So, I researched and found you can paint and seal your counters. So thats what I did!
I sanded down both the counter and island with 80 grit sandpaper, thats all I had and it seemed to scuff it up just enough. Then I primed it with some Kilz brand primer.  Then I began my sponging/marbling. 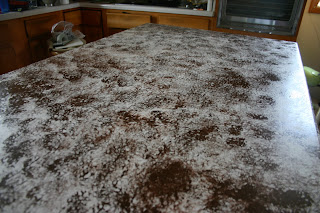 This is one layer of Dark Chestnut paint, I made a mistake and picked up an oil based paint and it worked fine. It just was a paint to clean off my sponge.  I ended up doing another layer of this before moving onto my next color. 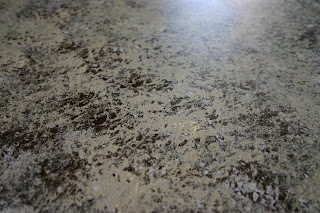 This has Gliden Bonjour Beige sponged over the two layers of Dark Chestnut. 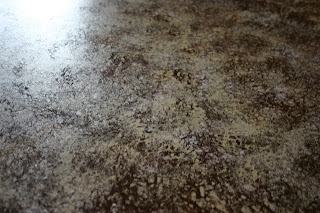 This is my with my final layer of Dark Chestnut, now all I have left to do is seal it!
I also did my counter tops, and didn't like how the back lip came out so I just painted it brown for now. I am pretty sure I am going to get some moulding to finish it off on the back. Just because I am not sure how I like the brown back there... 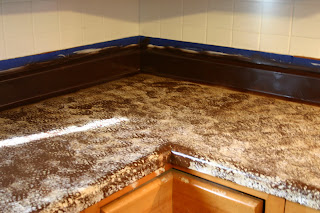 Not bad for having most of the supplies left over from other projects!  All I bought was the Dark Chestnut ( and I bought the smallest can, 5 oz for $3.99!) The most expensive is the sealer. Its a commercial grade bar top sealer that we got at Lowe's, we bought the big box because we have a big island, and it was $60.  But in our eyes, it would have been more for counter top and a piece to match the island...
Some spots look sponge-y, and I have gone back in a reworked, but look at the results once the sealer is on it. Examples here, here and here...Pretty different huh?

We will be sealing it tonight, because it worked out perfect, we are going away this weekend and won't need the kitchen! Perfect timing!