Just thought I would update you all... as some asked for details! 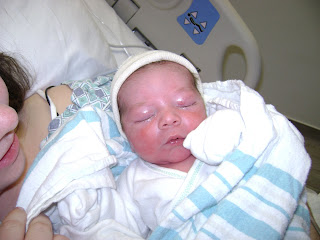 As some of you already know, I have a little man named Carter!

Carter was born February 11, 2009 at 1:29 am. After 31 hours of induced labor ( I was 2 weeks overdue!), stuck at 7 cm, and his heart rate decreasing with each contraction. I asked for a csection, something I was very against until I was put in the situation of needing one.  But in the end we were blessed with a beautiful, 7 lb 14 oz baby boy whose umbilical cord was wrapping around his head like a halo and I would not have been able to pass him through the canal anyways. 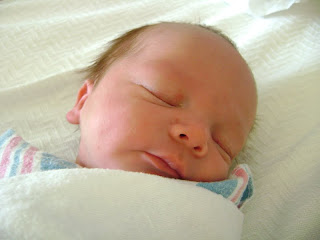 Now, this time around, I was offered the option of having a c-section again. And I decided that I would go that route, especially since I had such an interesting labor experience the first time. They were also warning me of a large baby, due to gestational diabetes (which the verdict in my eyes is still out on this one). So, we went ahead and scheduled our c-section for August 25 at 9:30.

Now here comes the ironic part. All night Wednesday I couldn't sleep. I was uncomfortable, I was hot, I had to pee. You name it I was up and down all night. But not nervous yet. Until I got up at 3:30am to pee, and had my water break, but I was not having contractions. Oh the irony.  We had babysitters lined up, and everything planned so that we didn't have to mad dash down to the hospital. So we went down, but since I wasn't dilated (go figure) they had me just stay on the monitors until we were ready for the c-section.  At 9:57, Wyatt Lucas was born!  Weighing in at 7 lbs 8 oz. and they said 18 inches long. Well, either he grew 2 inches in less than a week or they didn't stretch him ( I'm going with lack of stretching), he was 20 inches at our first appointment!

I can't be more happier with how life is right now, Wyatt eats and sleeps like a champ! We left the hospital weighing 6 lbs 15 oz and he was back up to 7 lbs 8 oz by his first appointment!

We are starting to find a routine, especially now that Daddy went back to work after 12 days off! Yikes. Wish me luck! Especially since Carter is infatuated with Wyatt, already attempting to pick him up out of the bassinet!