I've never grown potatoes before, so after seeing numerous towers online I thought hey why not!
Plus, my in laws gave me some potatoes plus I bought some seed potatoes.
So I had plenty to start with, but didn't know where to go from there.

So I decided to see how they grew, and work with it.
I place the potatoes on the ground (didn't even dig).
Put some dirt on top and watched.

And then they grew and grew, and I needed to add soil fast.
So that's when I tried some stakes and a plastic "wall o water".
I had it laying around the garden and thought why not. 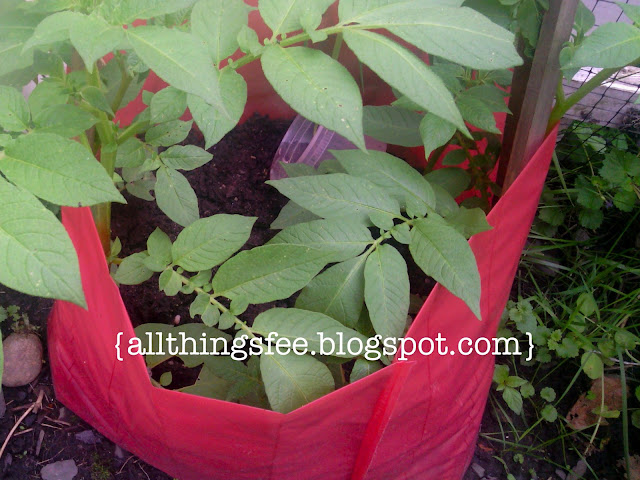 And it worked for the most part... Look at all that crazy growth!

Well the structure was rigid enough. As I added soil it wanted to go "out" not up.
So I decided to just use what I could find, and found some leftover plywood from some other home improvement project. 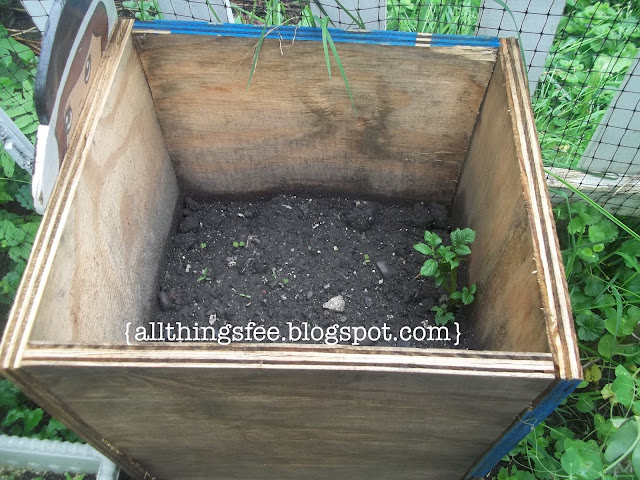 Since this is our first time growing potatoes, and you never know- it could be our last if they don't grow/do well. So, if the plywood only last this year.. It's okay.
(Do you follow on facebook? If so, you would have seen a sneak peek of how I cut the pieces....)

Potato towers are pretty neat, for a couple of reasons.
First, instead of planting them in the ground you plant them above so it's easier at harvest. You know exactly how far down to look because the bottom is where you started!
Second, your tricking the plant from what I understand. When you plant the "old fashioned" way, once the plant puts out all the potatoes that's it. But when you keep burying the plant it thinks its still underground and needs to continue sprouting spuds. Neat, huh?

So, I'm hoping the boys get to dig a few out here and there at least.
So we will see, and I will hopefully get to share!

Any potatoes in your garden?
We've got sweet potatoes, but they don't work the same way from what I read.
Maybe next year I will do a side by side experiment?

Email ThisBlogThis!Share to TwitterShare to FacebookShare to Pinterest
Labels: Grows