If you've visited my space for a while, you know my big boy ( can you believe I can call him a big boy? I can't!) loves Yo Gabba Gabba! I really thought when he first started to show interest at 16 or 18 months old he would outgrow it. Nope. At 2 1/2 he is still into it!

Anyways, when we started to tell Carter we were having a baby he was just about 2. So it was kinda hard to explain to him.
Well, after realizing that we owned the Meet My Family episode of Yo Gabba Gabba, we figured out how to break it to him. Muno has a baby brother and his name is Baby GoGo.

Well, long story short. Baby Go Go has stuck. If you ask Carter where Baby GoGo was, he would come right up to my belly. If you asked him what his brother's name was it was GoGo. So when I was planning on getting Carter something to give him once his brother was born, (who we did not name GoGo on his birth certificate, it's Wyatt) I got the idea of his own Baby GoGo.

But here's the hard part, I googled GoGo doll and got some girly doll. Not the Yo Gabba Gabba one.

But what I did find was this great example and mimicked my GoGo from there. 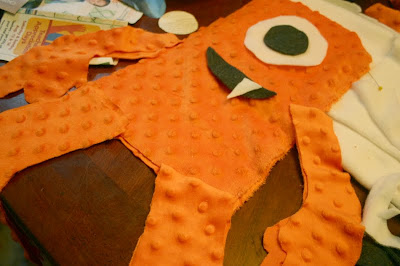 After a couple hours and some ripping out here and there Carter had his own GoGo complete with diapers and blankie! 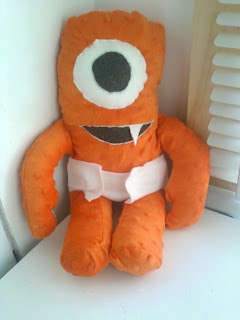 Not bad for not having a pattern, and was made out of 8 pieces!