To some people this is a no brainer. And it was for us for a while, but now I am sort of insisting that we made our own Iced Tea.

Now, I used to put it in this giant glass jug out on the back steps in the sun, and then bring it in. But then the jug didn't fit in the fridge. Ugh. So. I stopped making it, because when it was left on the counter, it would get gunky.

So here's what I do! I fill my pitcher ( that fits in the fridge perfectly) with hot tap water, then I add my teabags. This pitcher takes five, and sit it in the pantry until the color is changed from clear to tea colored. Then into the fridge it goes. 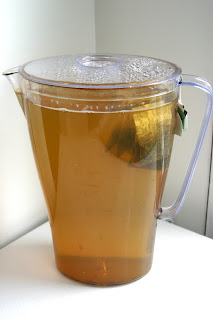 Here's the reason for insisting, COST!  We used to pickup a gallon of green tea, at least once a week, and that was 3 dollars or so, then we would also buy a case of bottled tea to take on the go or for lunch and that only lasted a week or two, at about 15 dollars a case. So...  Let's say I was spending about twenty dollars a week in tea! I know. Silly.

Now we spend about three dollars a week in tea!  Ahhhh. Tastes better to!