Ah. Garden Season, my favorite time of the year.

This year not only am I planting the garden, but also replanting the beds in front of the garden since we moved the peach trees last fall. Those pretty beds took a beating trying to move the trees. So I have been waiting to see what comes up, and moving them to better spots since they were thrown around during the move. You can see what the entry way (and garden) looked like last year, here.

In an effort to find all my flowers from the beds, I've been leaving them or moving them into some pots from my Tipsy flower planter (that I have taken apart. ha! I lost more soil trying to water those pots like that...so I guess that would be a project fail!) 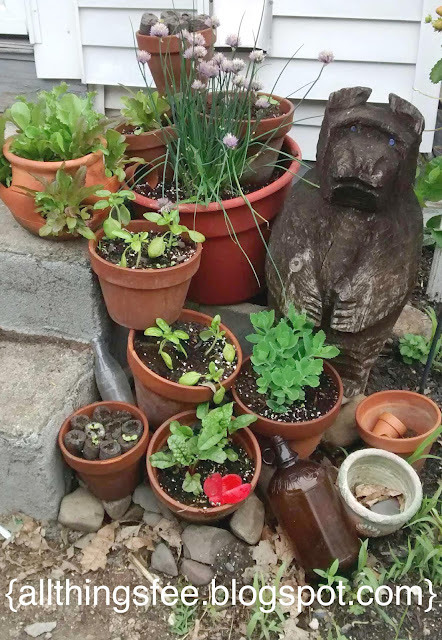 Those are my stairs off my kitchen on the left, and the garden is on the right.
Nice and close, we have been clearing the back half of our property and
I am so unsure if I would want the garden that far from the house.
It's so nice to run out for 2 seconds when the kids aren't looking! 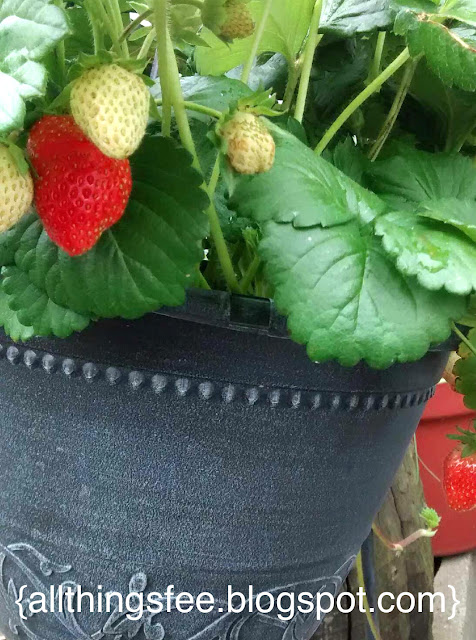 Right at my garden gate I have this amazing hanging basket, the hubs got me for mothers day!
Looks like we will be getting some strawberries this weekend! 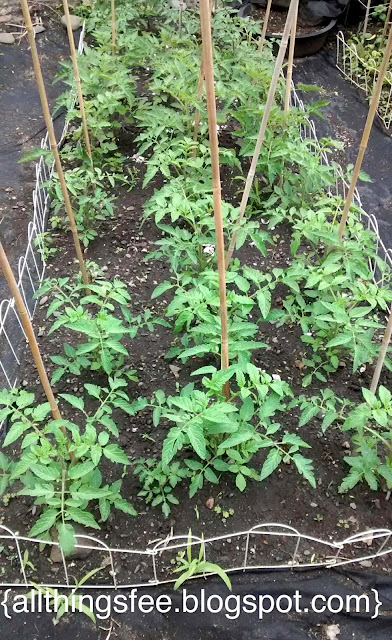 As you walk into the garden, there is a skinny row of cucumbers that are not very picture worthy! Hopefully they start to perk up, or I won't be making as many pickles as I'd like this year!
The next row in is my tomatoes! Well some of them.

We over bought. By a few. Or a dozen. I'm not sure! ;)
In this bed we have a dozen early girls (they were my best producer last year!)
Two types of plum tomatoes, some big boys and one other kind I am forgetting the name. 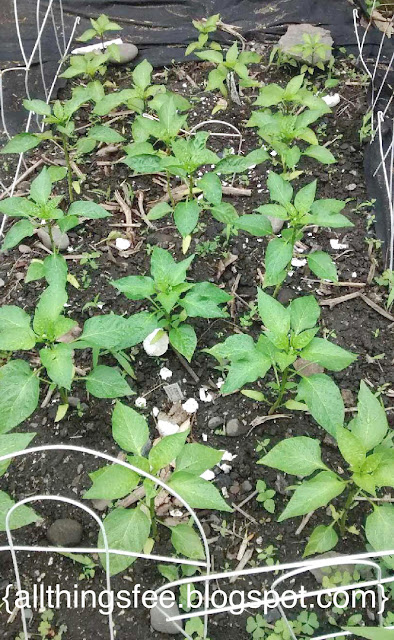 When you turn around from the tomatoes, you'll find my peppers.
Two kinds of jalapeños. Two kinds of bell.

See the little white fencing? When we bought our house, there was a bunch and I hated it.
I kept it, but didn't use. Then I had kids, 3 under 5 years old and a garden.
Best. Cheap. Idea. Ever.
I use it to hold down my pathway fabric and tell the kids they can't step into the dirt (when plants are little) and it has worked wonders for me! It's just high enough to keep them out! 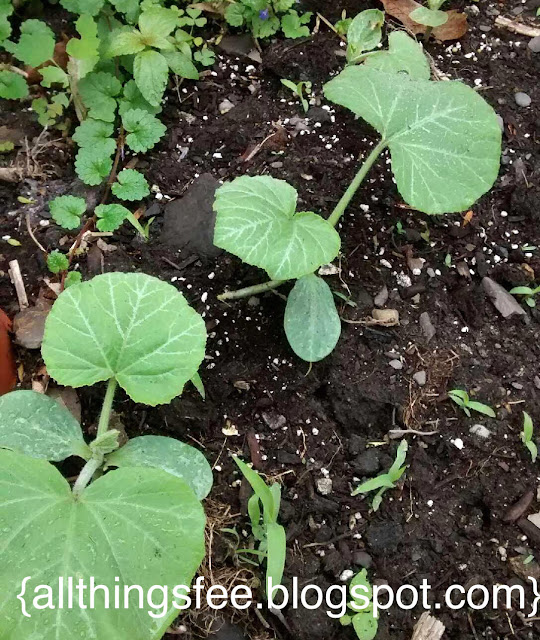 Past the peppers, is my squashes.
I have high hope for these.
For some reason I am the only person I know that cannot grow a zucchini or a squash.
I have very little success. Fingers crossed!

Then you turn and walk under the tunnel!
The bean tunnel!
(Where the hose is, is right in front of the squashes)

Last year I did this, and then soon realized I grew bush beans. Oops.
This year I put pole beans at the base and bush on the sides. 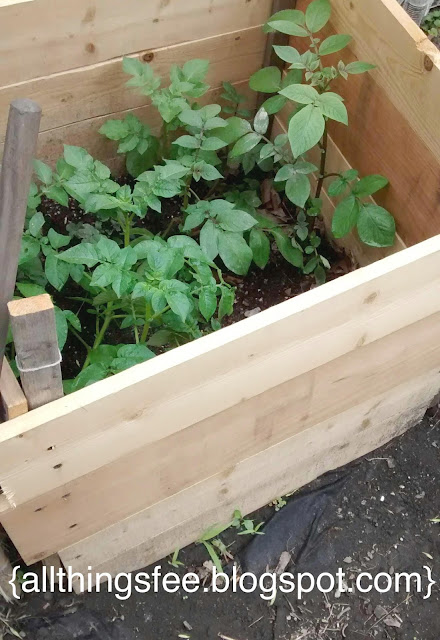 Once through the tunnel, you walk up to the potato box/condo/tower.
I better add some dirt!
I think i may have missed the window to get them to produce more
because they're pretty high at this point... 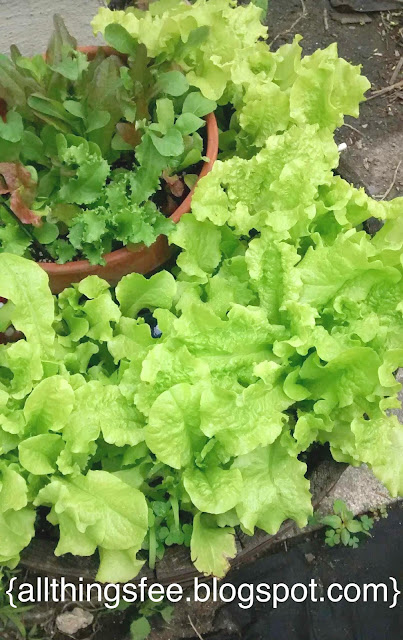 This year my lettuce is prolific! I have never had this much success!
I started them in my little greenhouse from my inlaws...
And then planted in my asparagus barrel since I didn't see any growth. 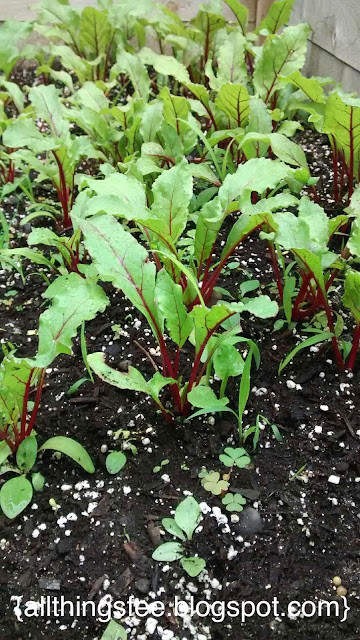 Once you are past the potato box, you are in what I call the back half of the garden.
There are blueberry bushes, garlic, raspberries, peas and about a dozen more tomatoes.

Oh, and my beet bed.
I would love. love. love to grow beets. I have tried for years and always get beautiful greens,
but barely any beetroots. So this year I am babying them.
Last year I got a raised bed for mothers day (can you tell my family knows what I want!)
So this year I filled it with some compost, potting soil and planted some beets.
Hopefully I get some! 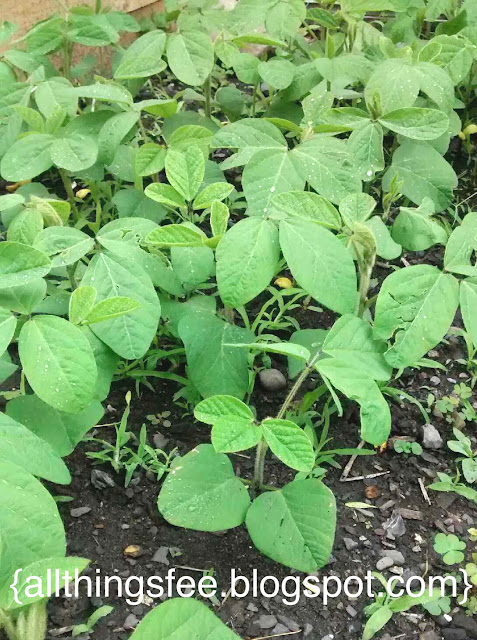 Lastly, our most "exotic" plant...Edamame.
We love it! And it is just as easy to grow as beans!

I've already harvested my rhubarb (hence no pictures), some lettuce, peas and strawberries!
It's amazing how much things have grown already!