Oh garden how I love thee!
While I haven't been posting much, I've been hard a work getting our garden up to par!
We live in zone 5a, so our last Frost date is mid may. I've gotten to know which plants like the frost and which do not, so I know what to plant end of April and what waits til June.

Last year I grew 130 POUNDS of produce! It was amazing!
And thats just what I weighed, not to mention what the kids eat while "helping!"
This year I decided to go bigger, because my husband got me a pressure canner for Christmas, so I will be canning salsa, sauces and more! Before I could only do pickles, but more on canning in another post! 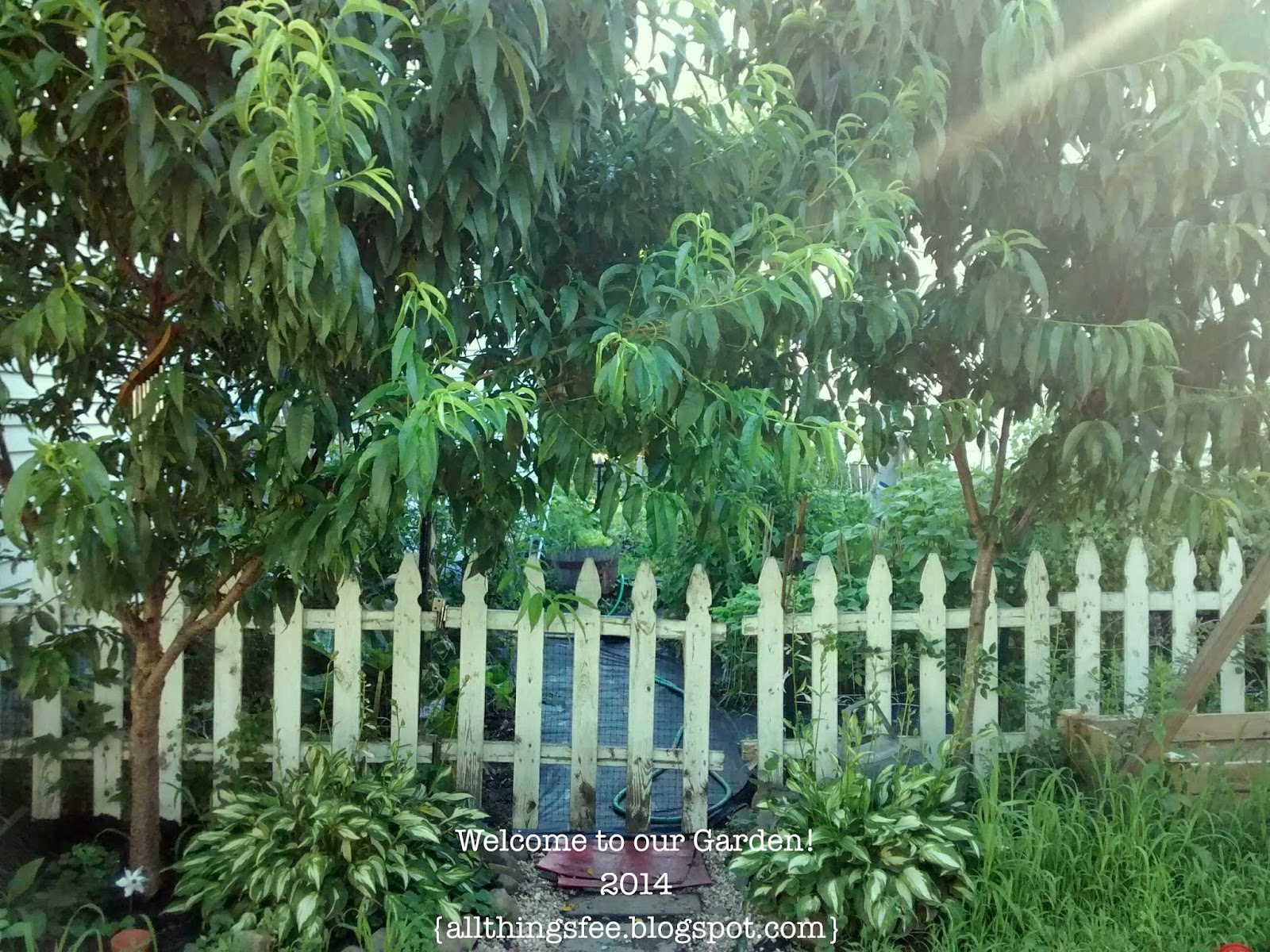 When you come out our back door and turn to the left you see our swing set, turn left again like a U turn and this is what you see! Amazing right? It took several years to get it to this size of a garden, and to look this cute but I'm one proud gardener! 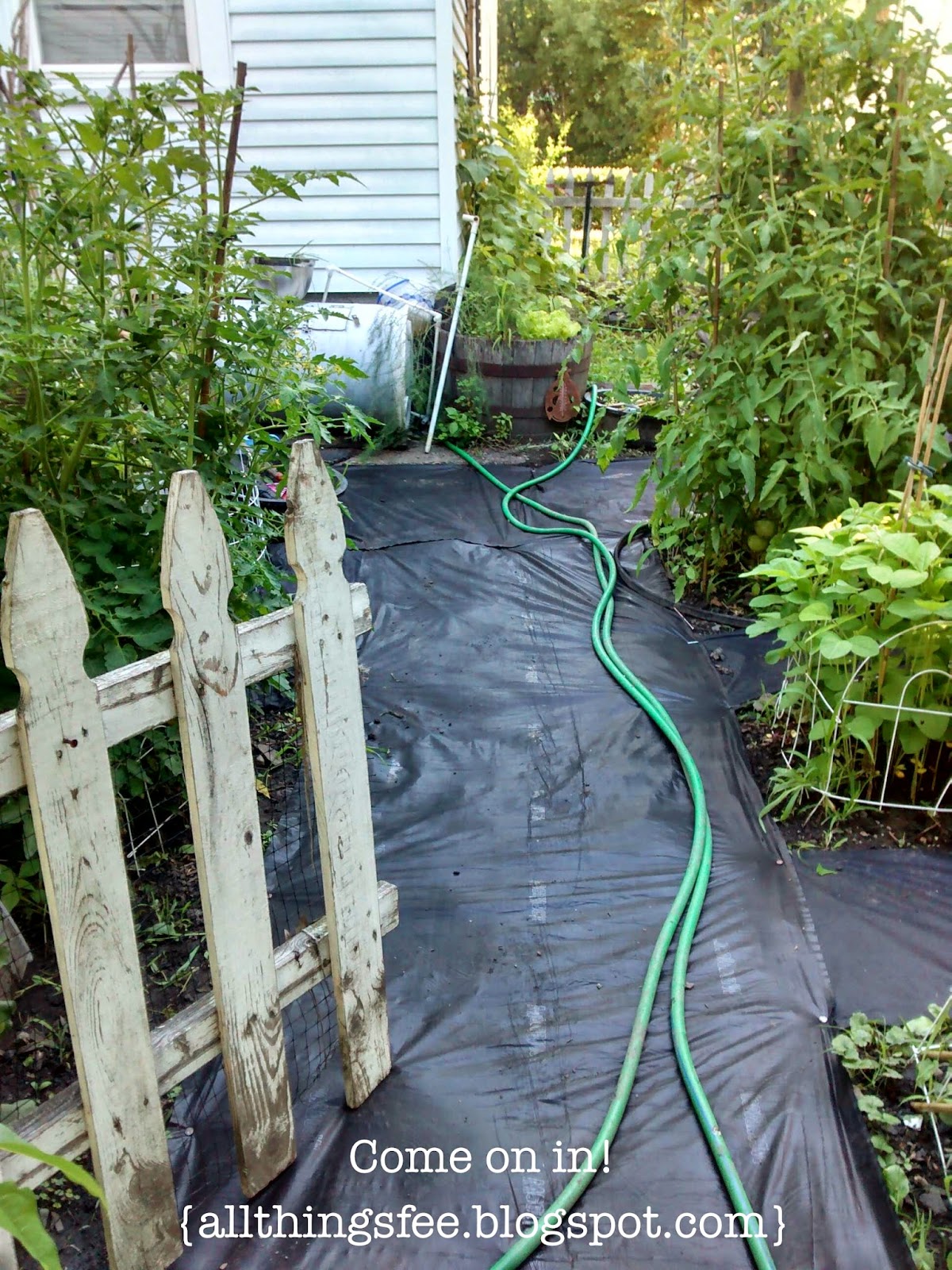 When you open the gate you in what I consider the front of the garden, because the way my house and yard are it created two separate areas.
Here is what's growing in the front area. 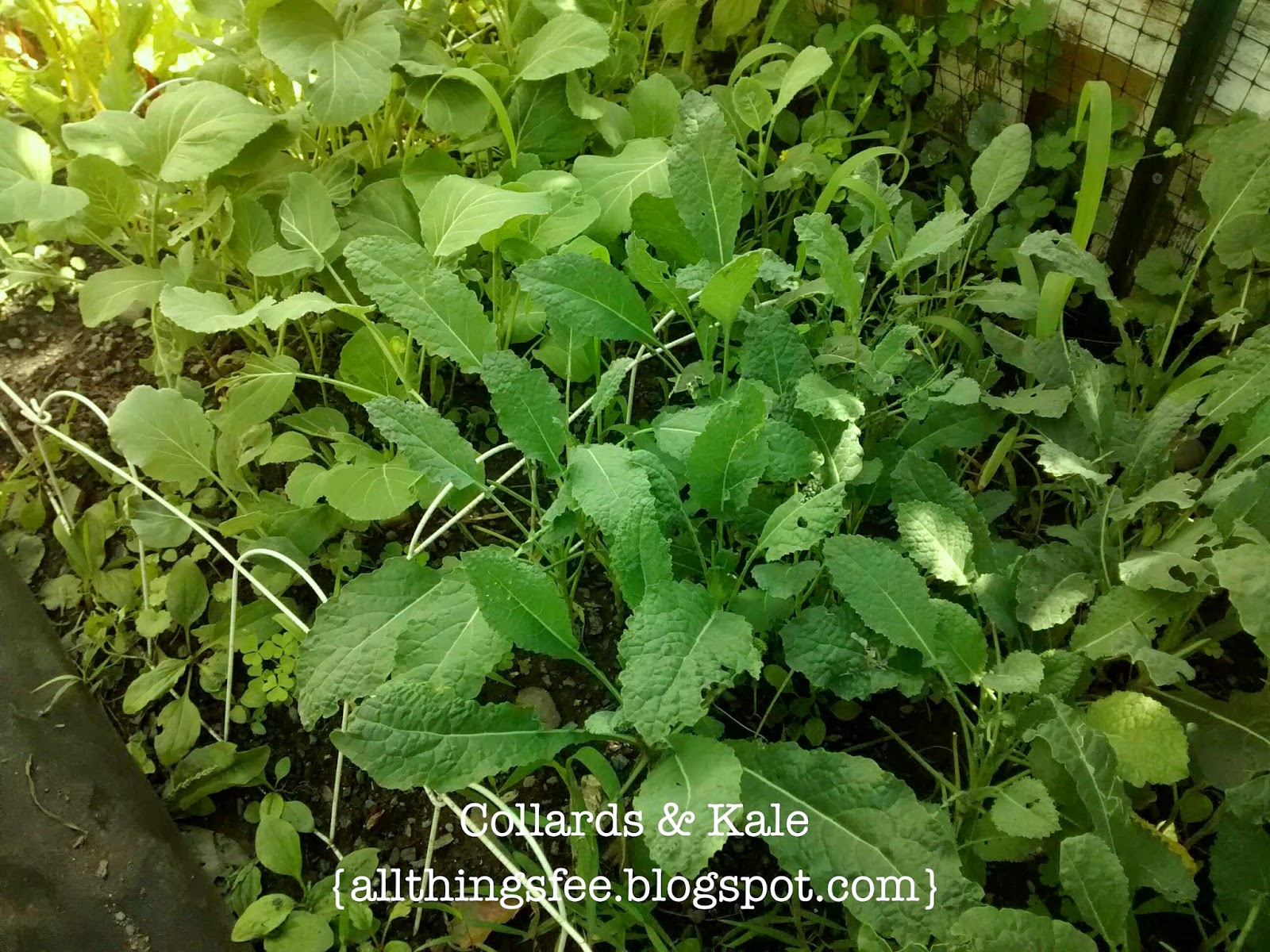 Right as you open the gate to your right is the greens. 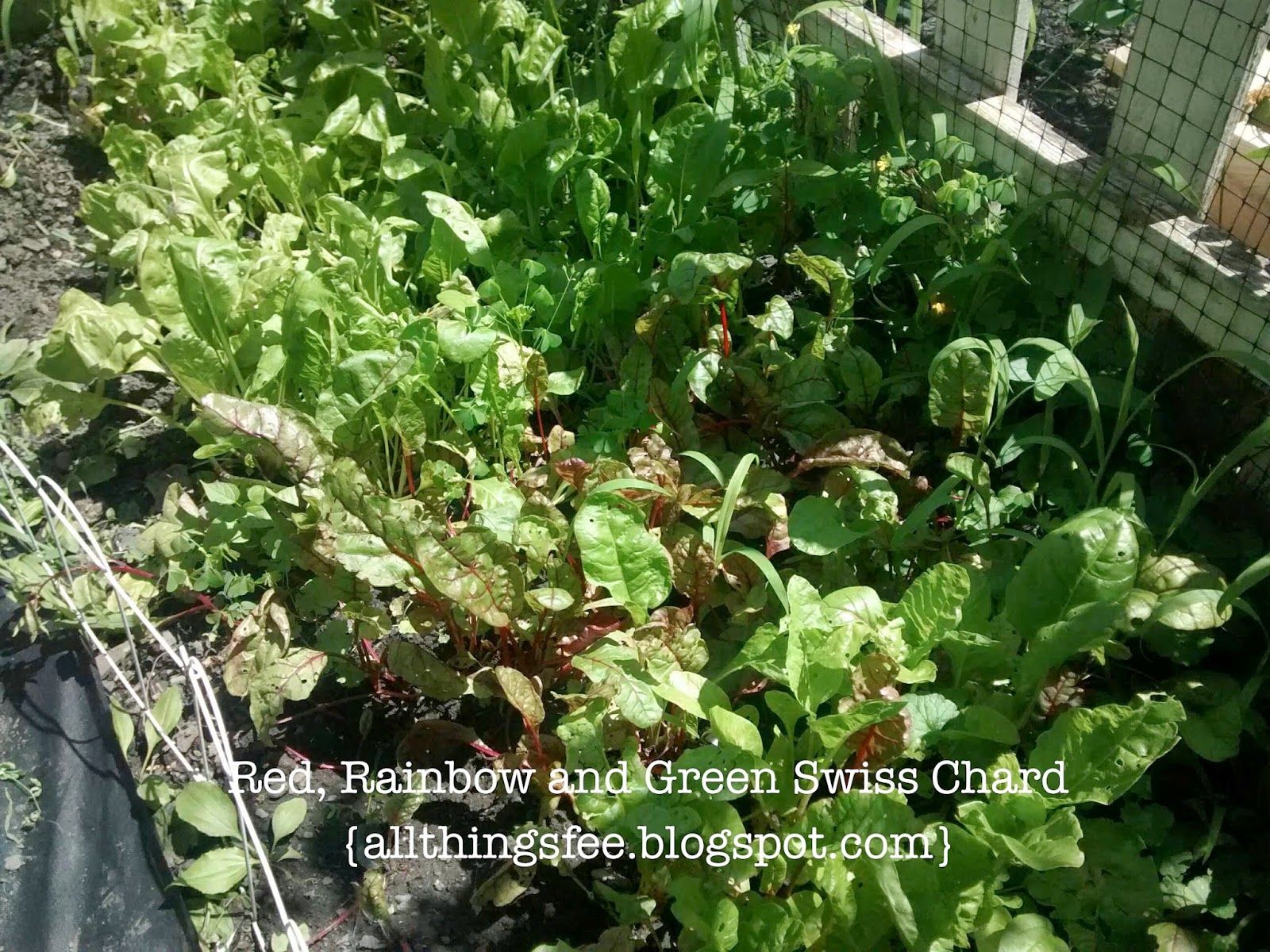 I had garlic there too but already pulled it. It looked so pathetic, and I got a whopping pound of garlic. I had high hopes for this year but will try again next year (this fall actually)!

On the left, behind the gate is our rhubarb.
When I find a minute strawberry rhubarb pie and jam will be made soon! 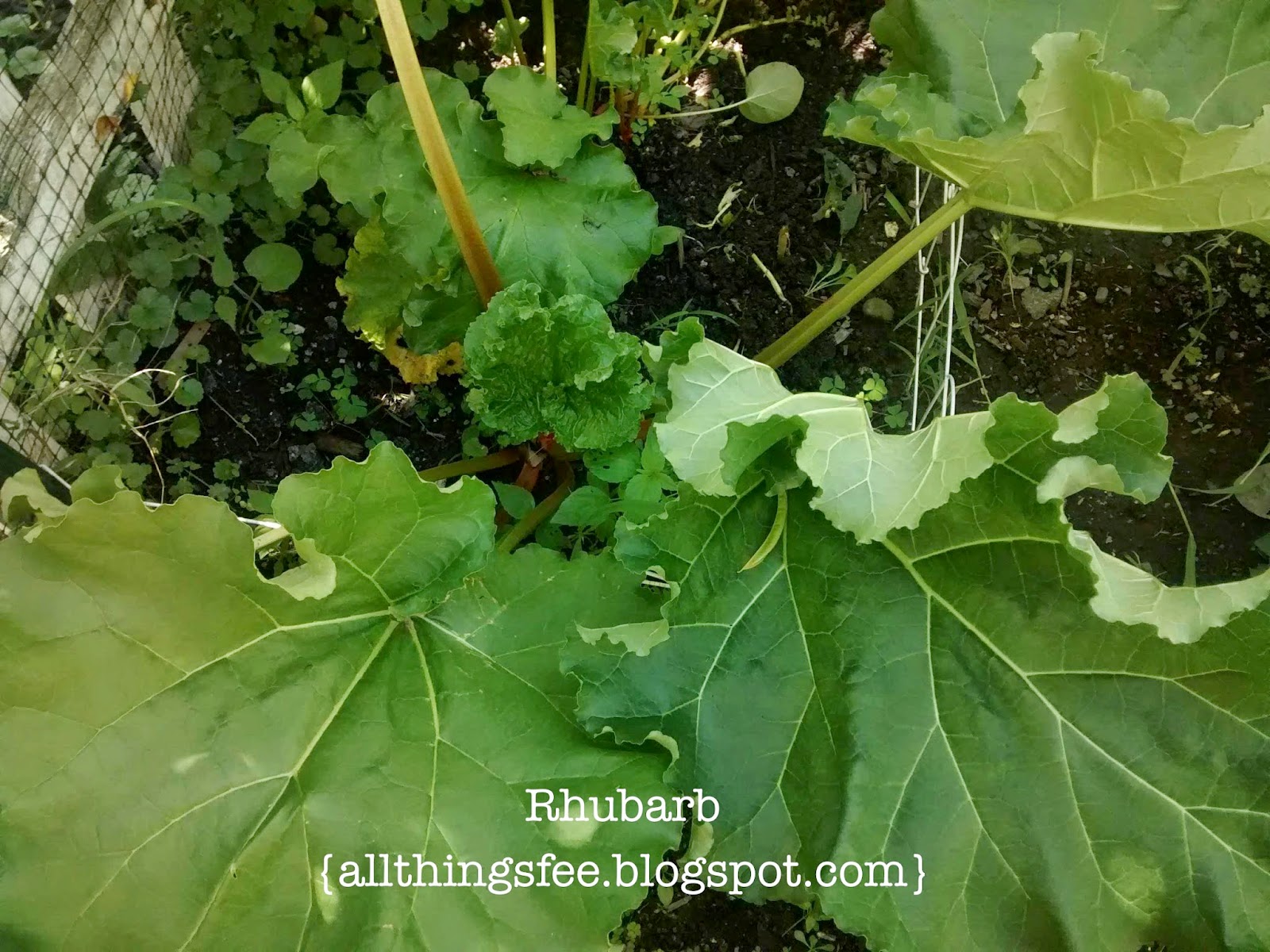 In the second row on the right side of the front garden is two succession plantings of Edamame. We just finished the last of what I froze from last year, and I planted double this year. Fingers crossed for a good crop! Next to the edamame is the peas, Yellow and Green. Wyatt has declared the yellow are better! 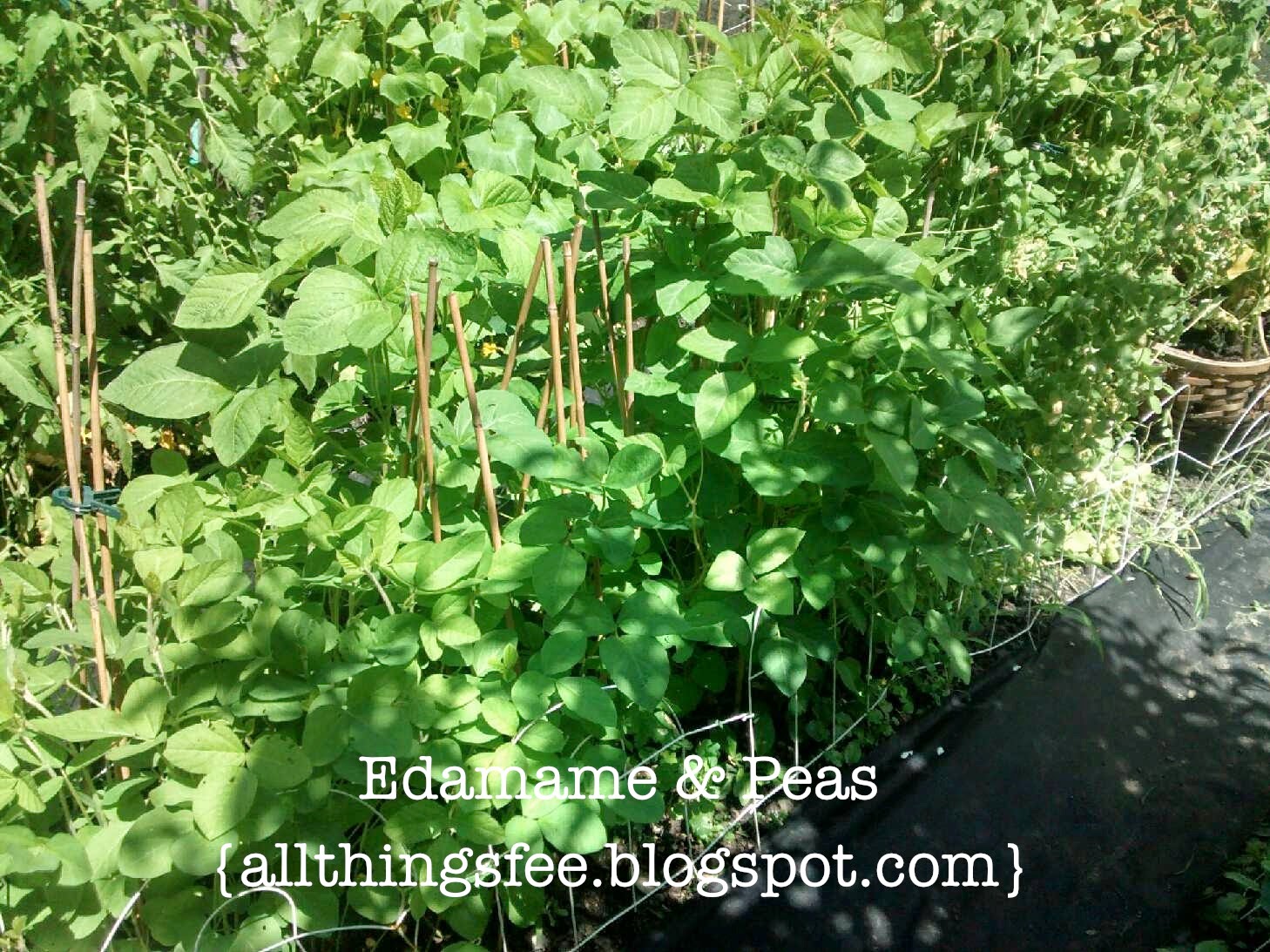 At the end of this row behind the peas, is our potato tower.
Last year I smothered  mine not realizing how to grow them.
This year they are growing strong!
(I did some weeding right before the picture,so they were a little manhandled) 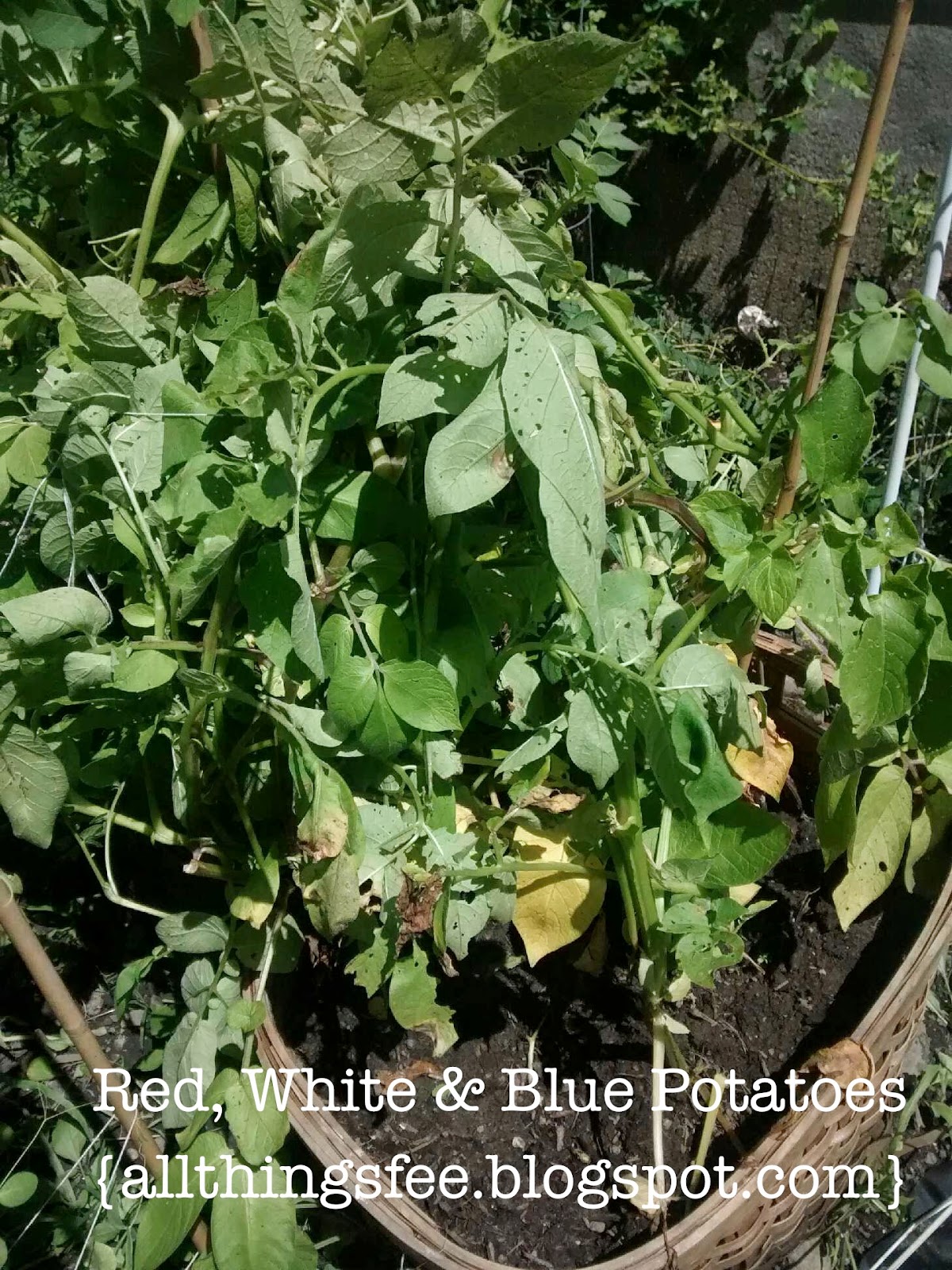 In the second row on the left is our Cherry Tomatoes. These are an oops moment.
I decided back in February to try Winter Sowing, so I went through my seeds an found a free gift pack someone gave me, it was about half the seeds of a normal pack.  Thinking that winter sowing wouldn't work I threw the whole pack in. Well. All of them survived and thrived. So yup. There are 20 cherry tomato plants shoved in that bed right there! 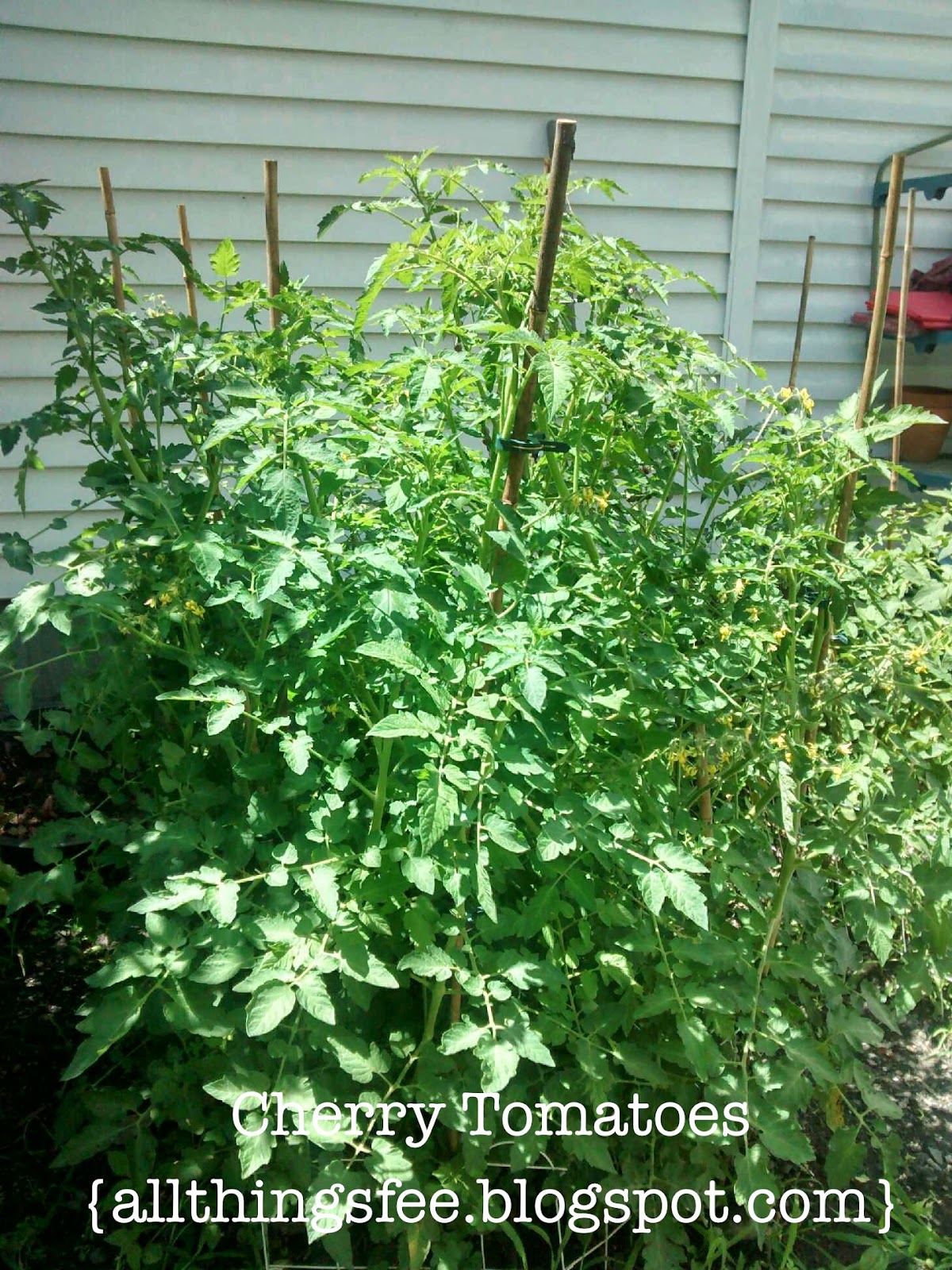 The last row on the left (row 3) has my Plum tomatoes in it. I bought these at a local nursery and my winter sown cherry tomatoes are bigger than them. So yup, I will be starting all my tomatoes via the Winter sowing method (I'll definitely share more on this topic soon!) 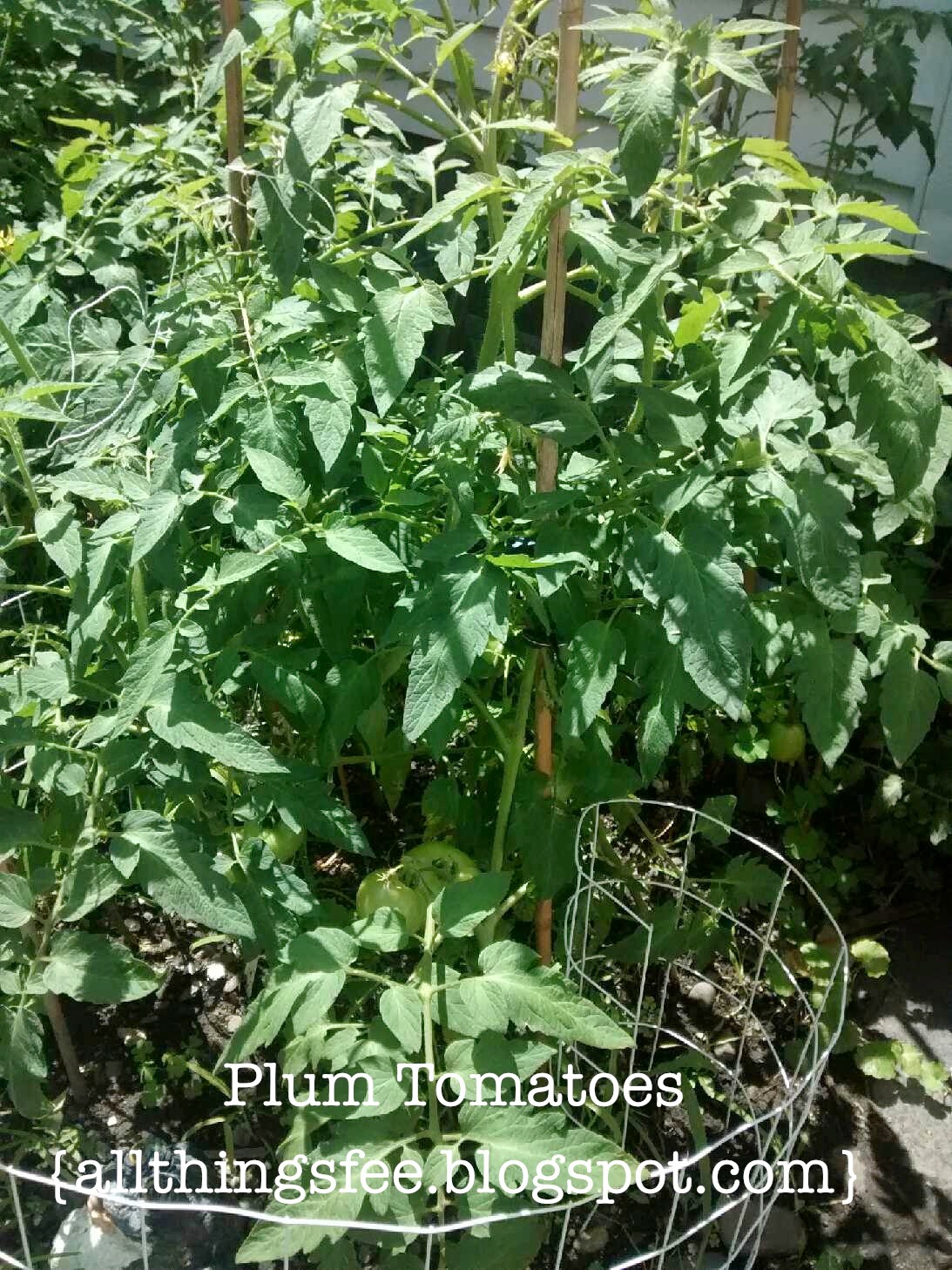 Onto row 3 but on the right side of the path. First up, the Early Girl tomatoes (from a local nursery) There are at least a dozen tomatoes if you look under the leaves! 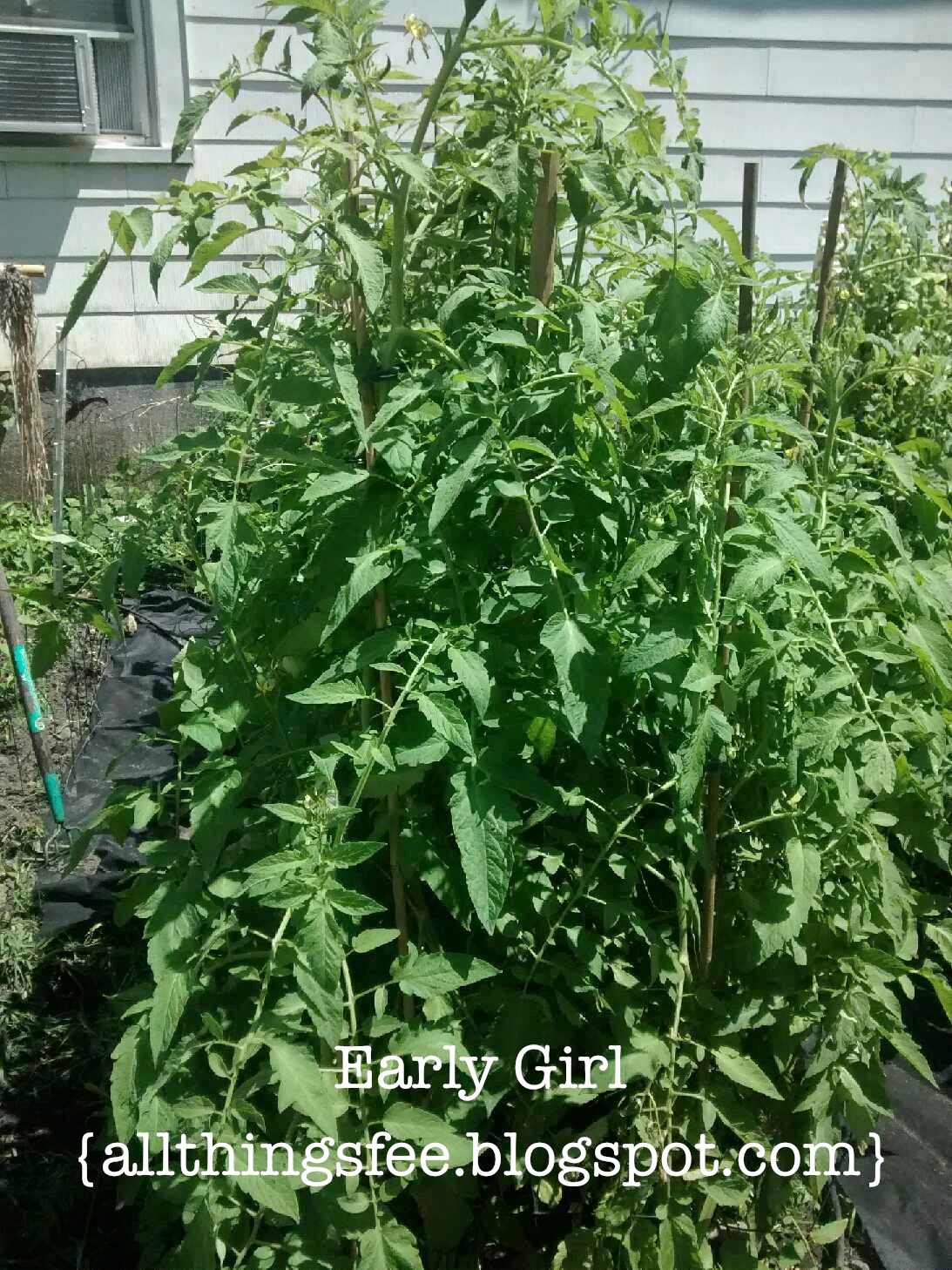 Next to my tomatoes (because of companion planting) is Eggplant.
My mom planned on working my "farm" for produce and this was a request of hers.
I was very pleased to see flowers last week, so we should see baby eggplants soon! 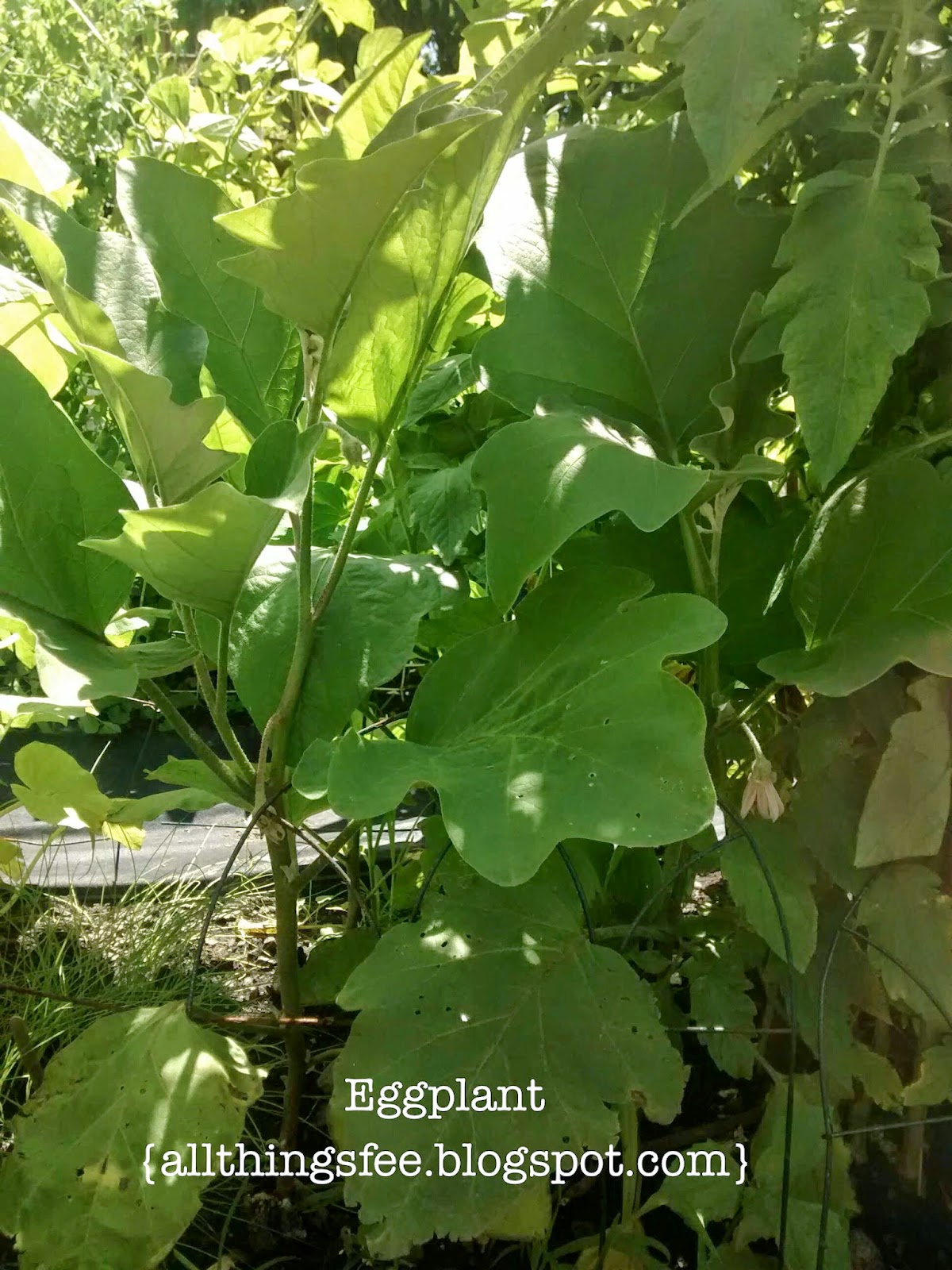 Beyond the Eggplant are four Cucumber trellis'.
I never have luck with cucumbers. Last year I bought 8 plants only one produced!
So this year I dumped one FULL pack of seeds around each trellis assuming defeat.
Well. They all took too! 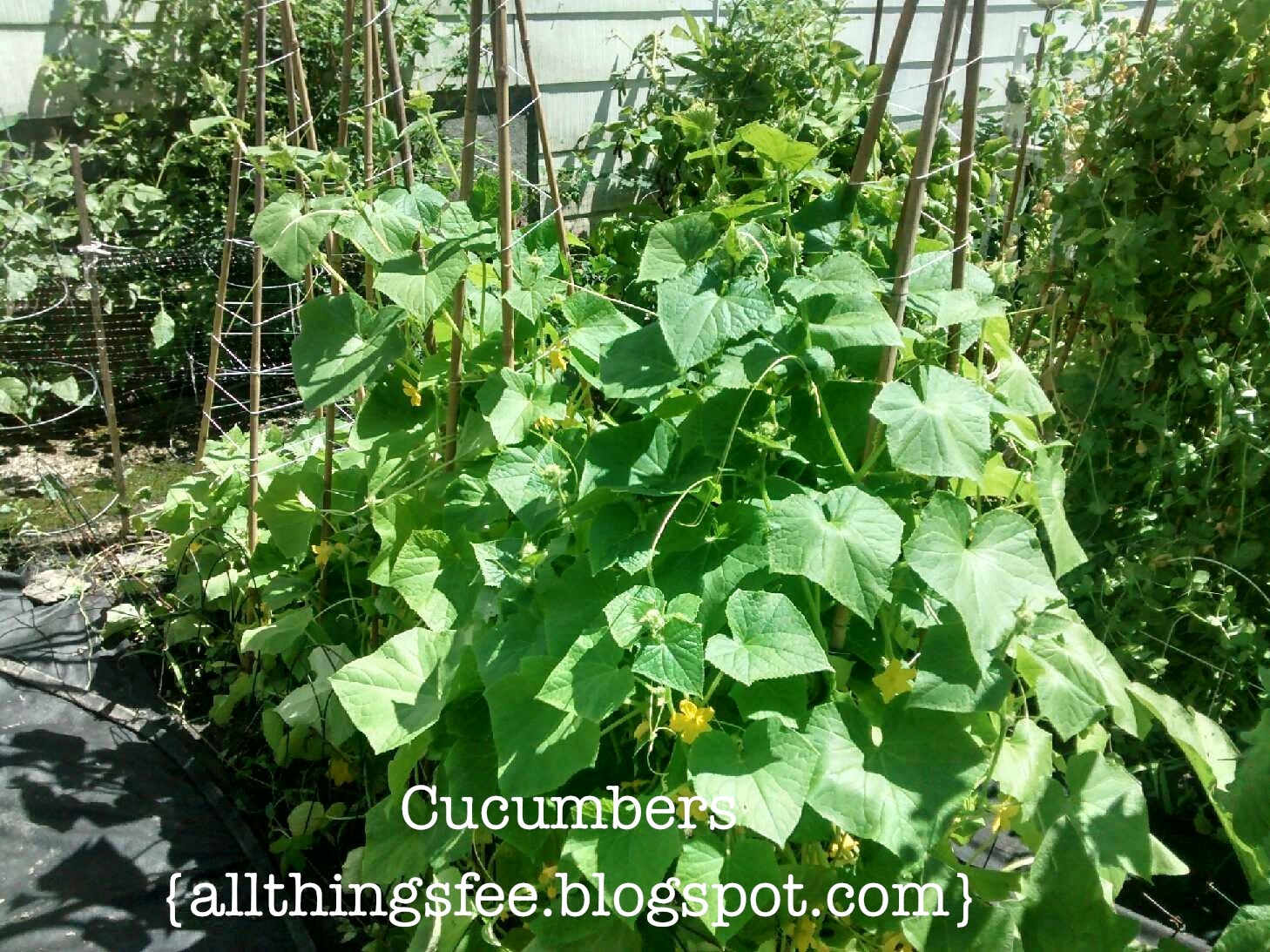 Now, that's it for the front of the garden. When you pass row three you see this. 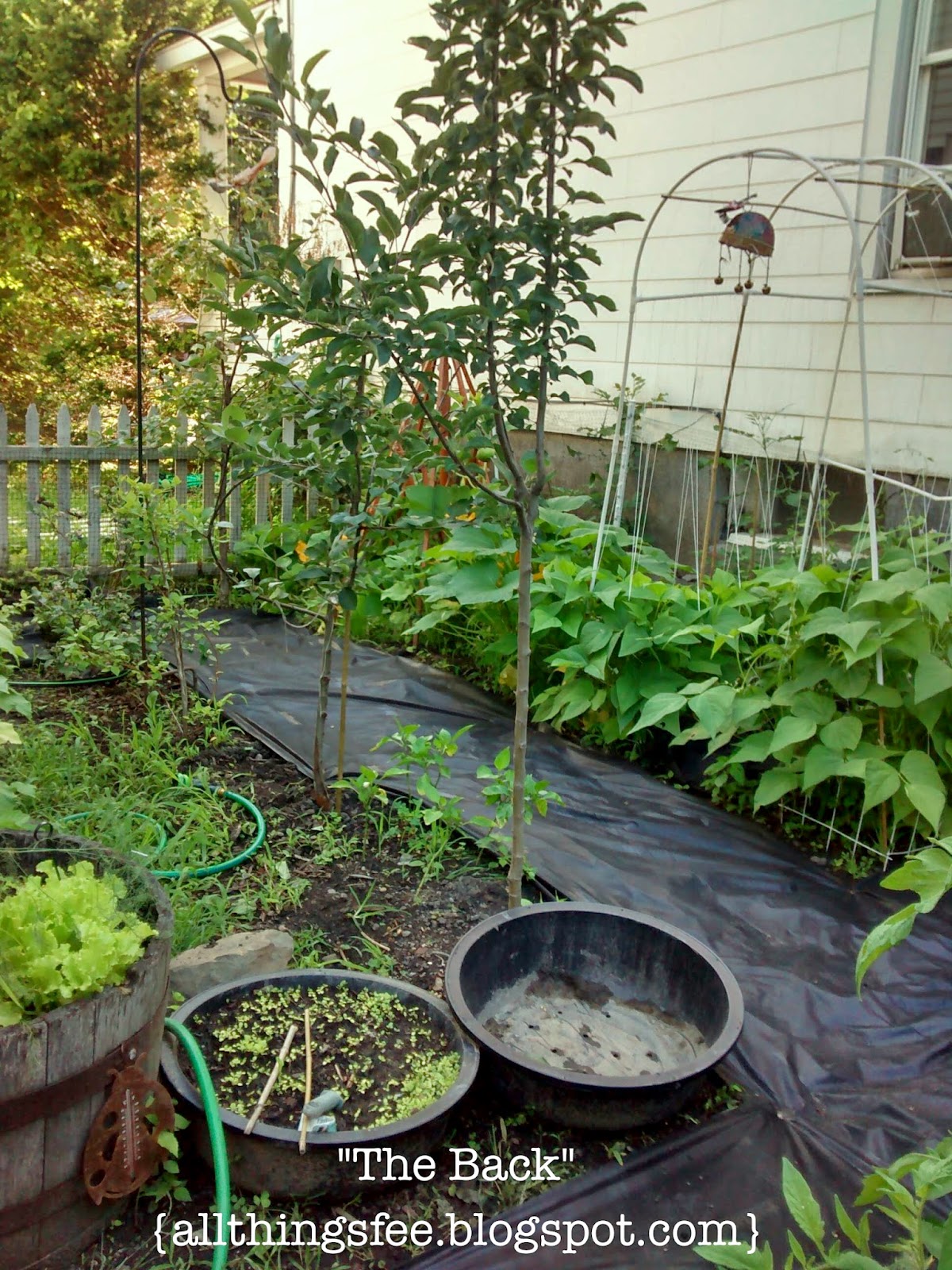 Last year I tried to use my umbrella trellis for my green beans, well they decided to grow up the sunflowers instead. And were GINORMOUS. I was putting Carter on my shoulders to pick them in August. So this year I thought I would attempt a cute bean house for the kids to be able to go in and pick.

So far I'm on the fence with out it is going to work. I've already got beans that I could pick this week, while last year I never got any til Wyatt's birthday in late August. Hopefully they will just keep growing and producing all summer? Or I got bush beans. Oops. 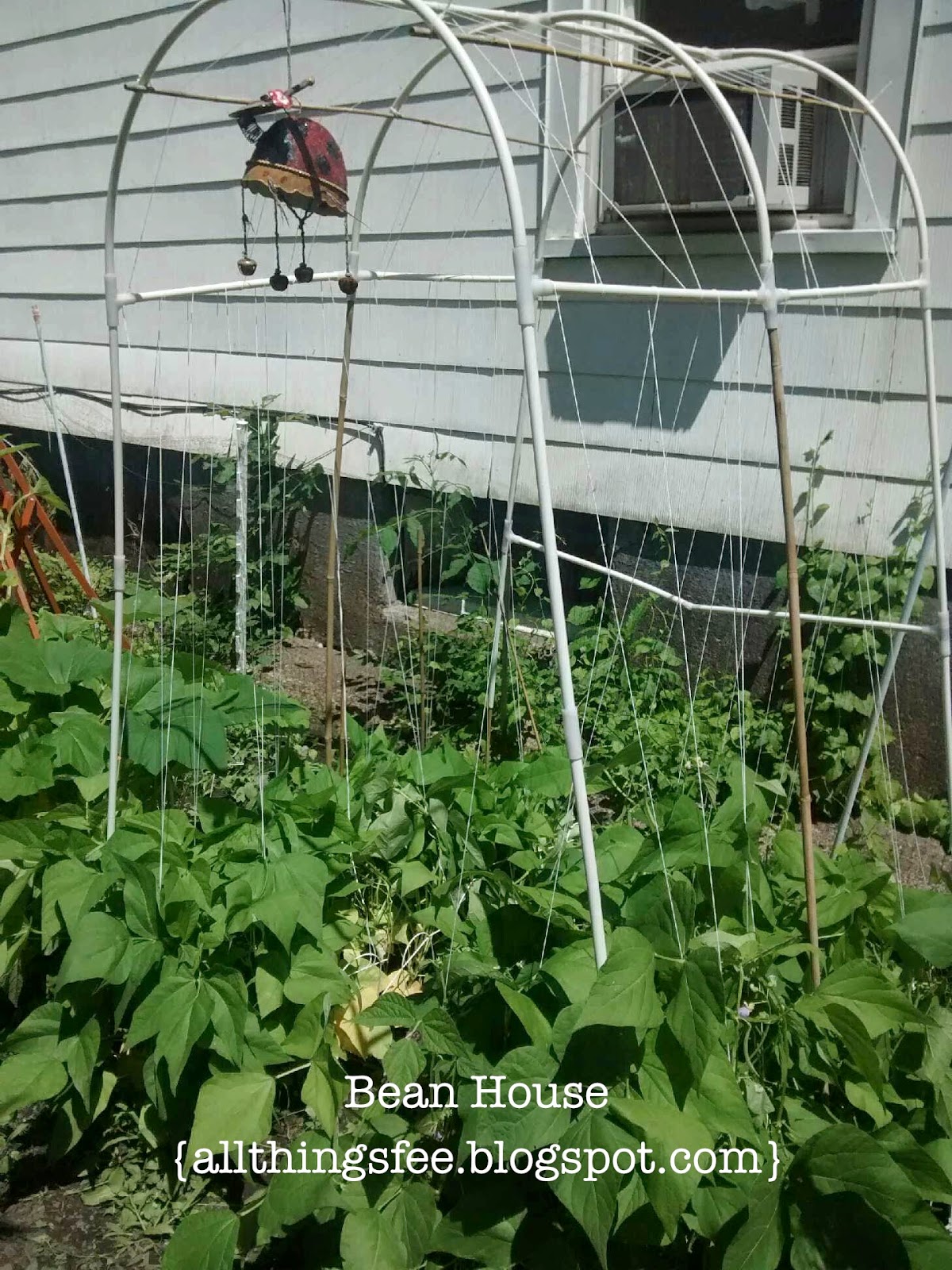 To the left of the beans are Squash and Zucchini. The yellow squash seeds all took, only one single green zucchini did. Guess I won't be making that much zucchini bread! 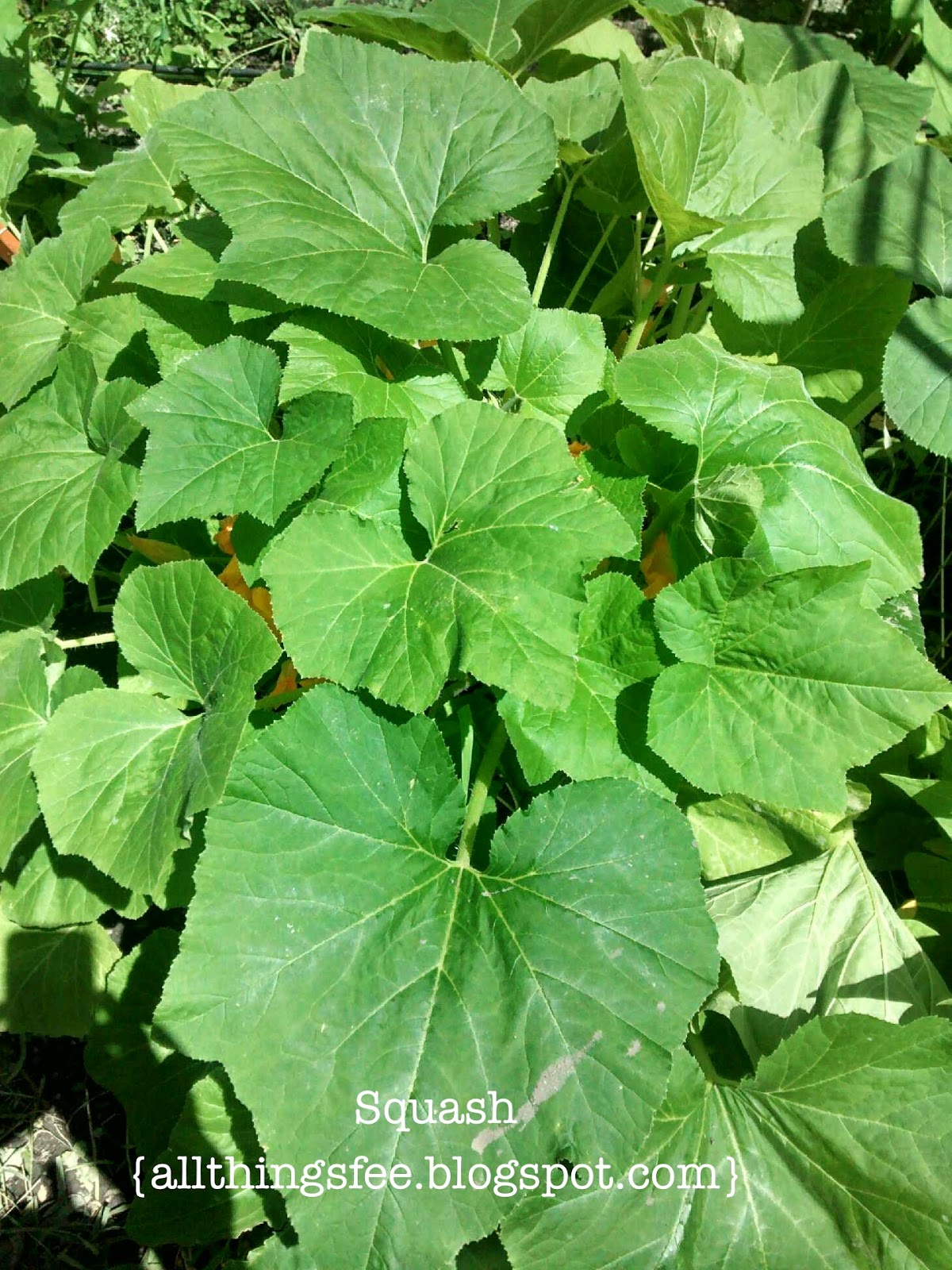 Last in line are my pumpkins, if you follow on facebook you may have seen I was rescuing pumpkins out of the compost all spring. 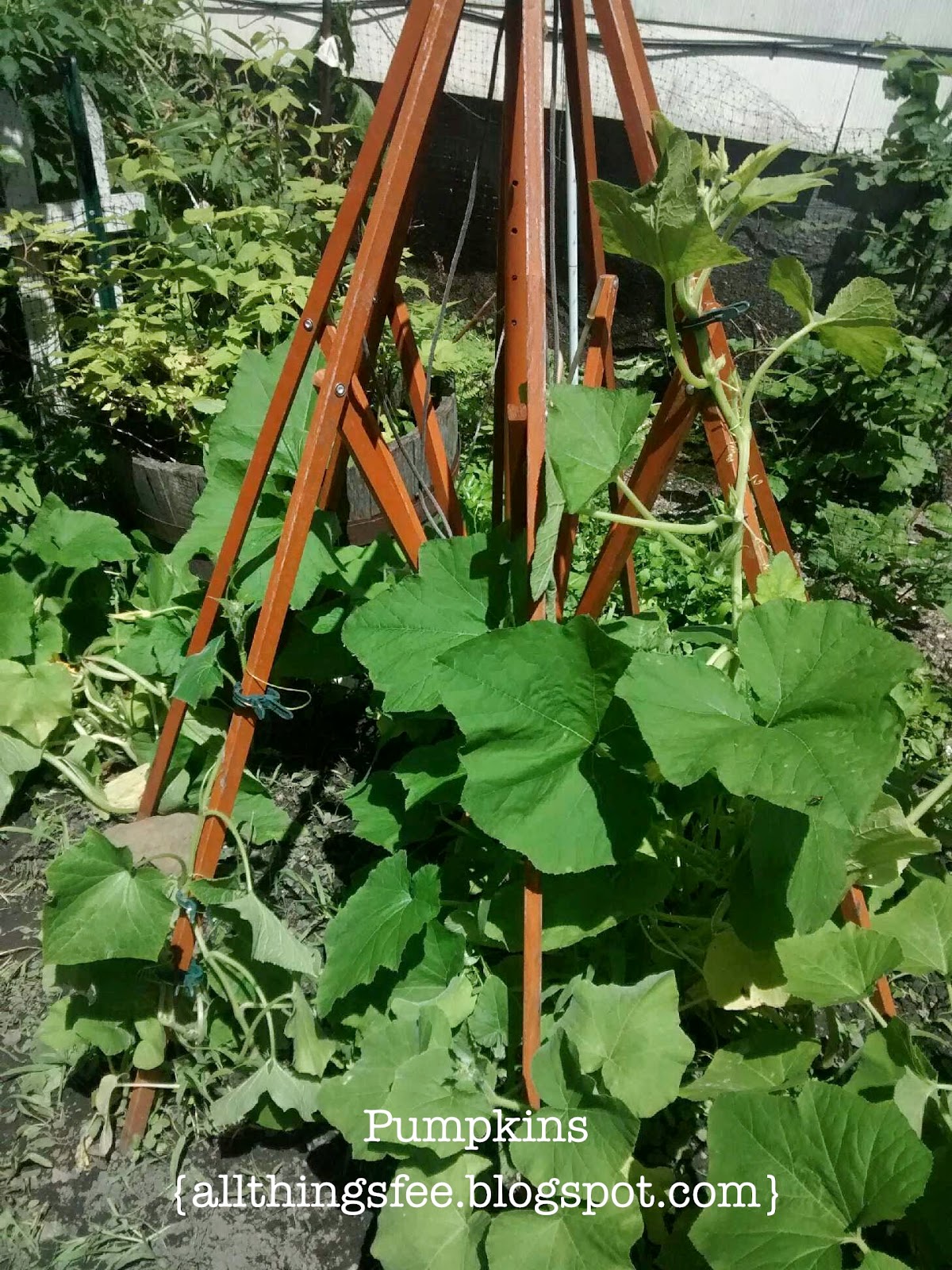 Turn around towards my house, and you see my blueberry bushes and apple trees (not pictured) and my container cucumbers. My in laws grow everything in containers, and thought since I haven't had luck that they would start me some containers. Guess pickles will be a must! 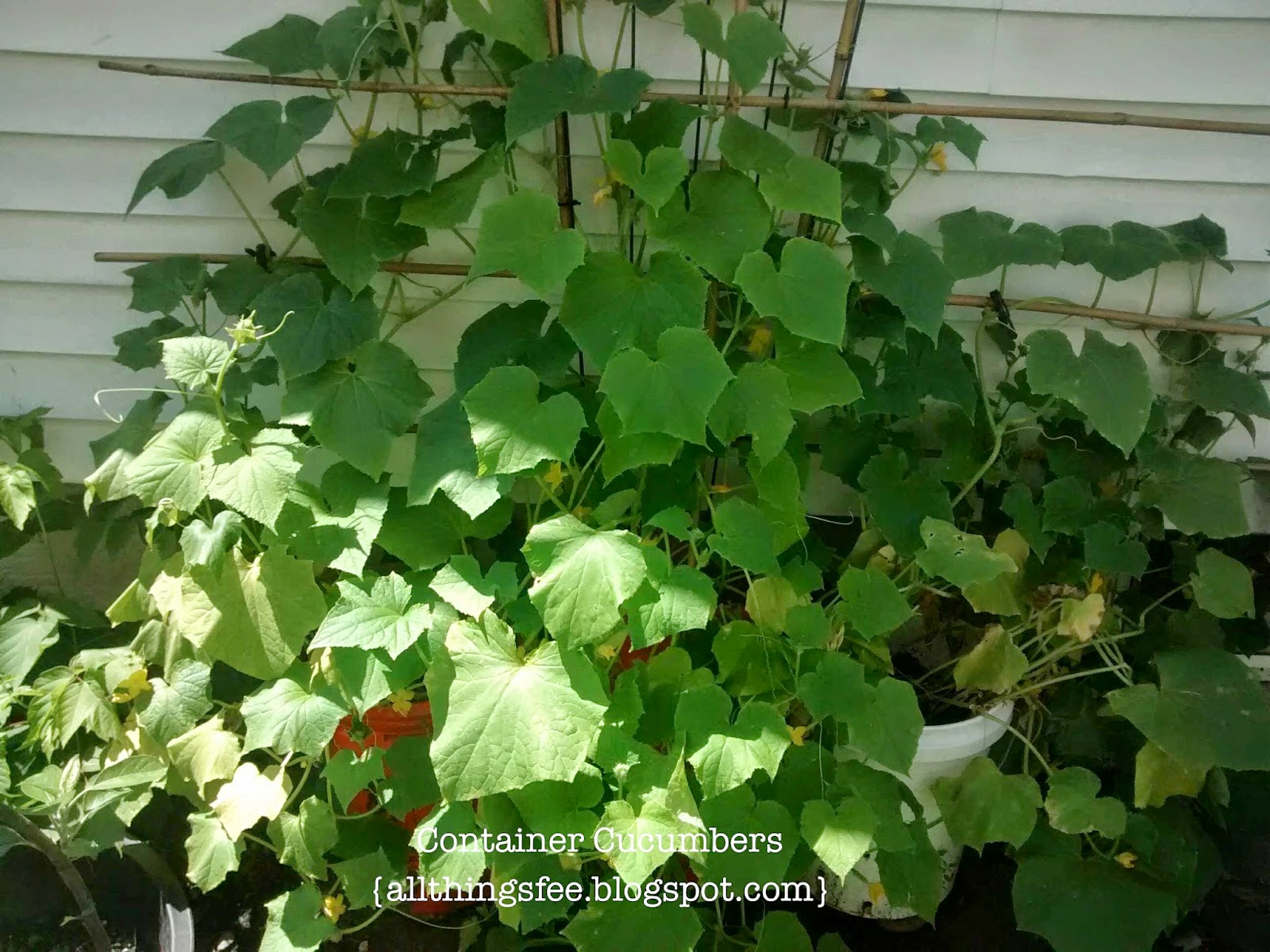 Under my apple tree on the corner is my asparagus bed (in container with lettuce).
We got 5 stalks of asparagus in the Spring, so I put lettuce in to fill the space. 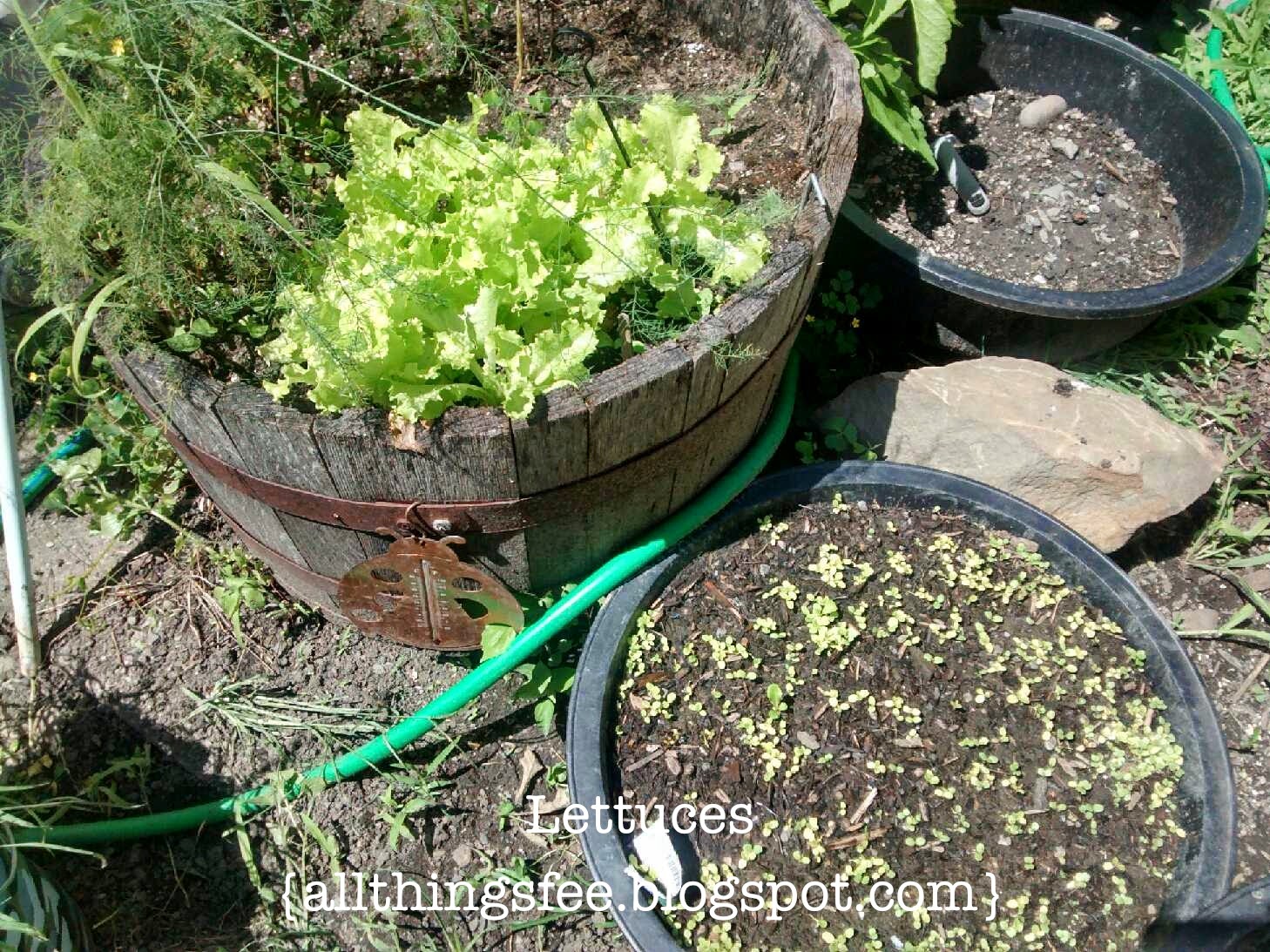 Last up my herbs, they are doing really great!
I think because they are shaded by my peach tree they are staying wet enough!
This was my tipsy turvy planter from last year, but the dirt kept running out when I watered, so I just changed the configuration. 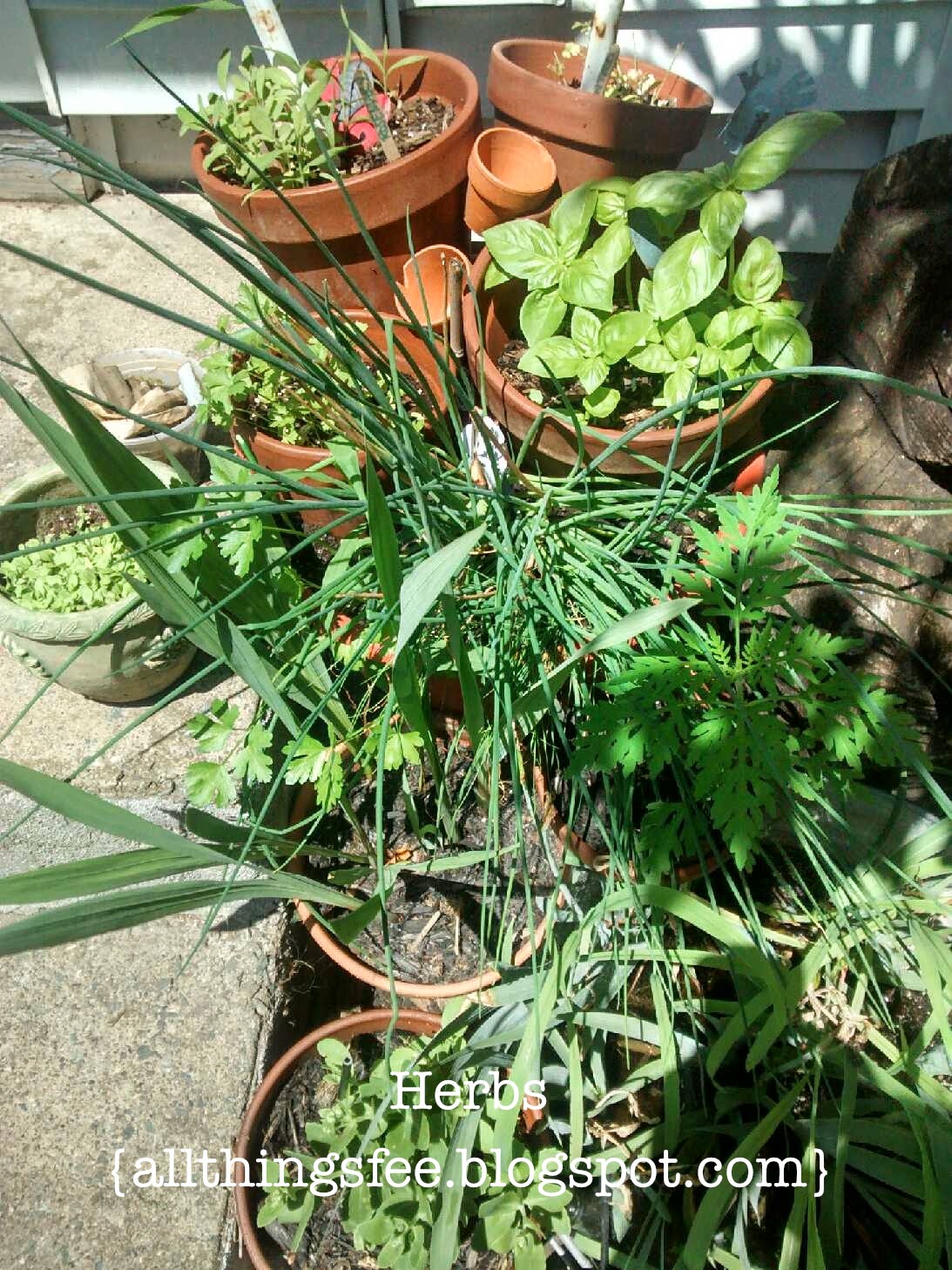 Email ThisBlogThis!Share to TwitterShare to FacebookShare to Pinterest
Labels: Garden 2014