While pregnant, I introduced Carter to Peter Pan.
Which led to Jake & The Neverland Pirates,
which led to Carter loving Pirates.

So I asked him, what he would want to be for Halloween, his first answer Pirate. Perfect. 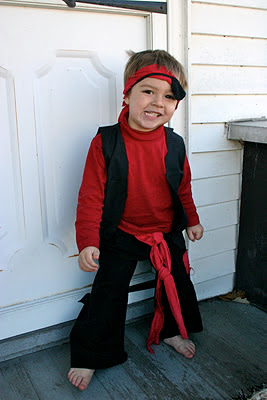 This was a simple costume to make! All I had to make was his pants ( which I could have bought, but had enough fabric for) his vest, bandana, belt and eye patch (per his request)!

To make the vest I simply traced the outline of a shirt that fits him. Cut up the center and sewed the sides and shoulders. I added a patch on one side.

To make the pants I made them exactly the way I make pj pants for him. Full Tutorial here.

The bandana and belt are just ripped up strips of red ( that I dyed) fabric. I put a piece of elastic in his bandana back to help hold it on. The belt I just tied.

Eyepatch was an oval folded over the elastic and sewed down.

And tomorrow, I am sharing his brother Parrot, Wyatt.